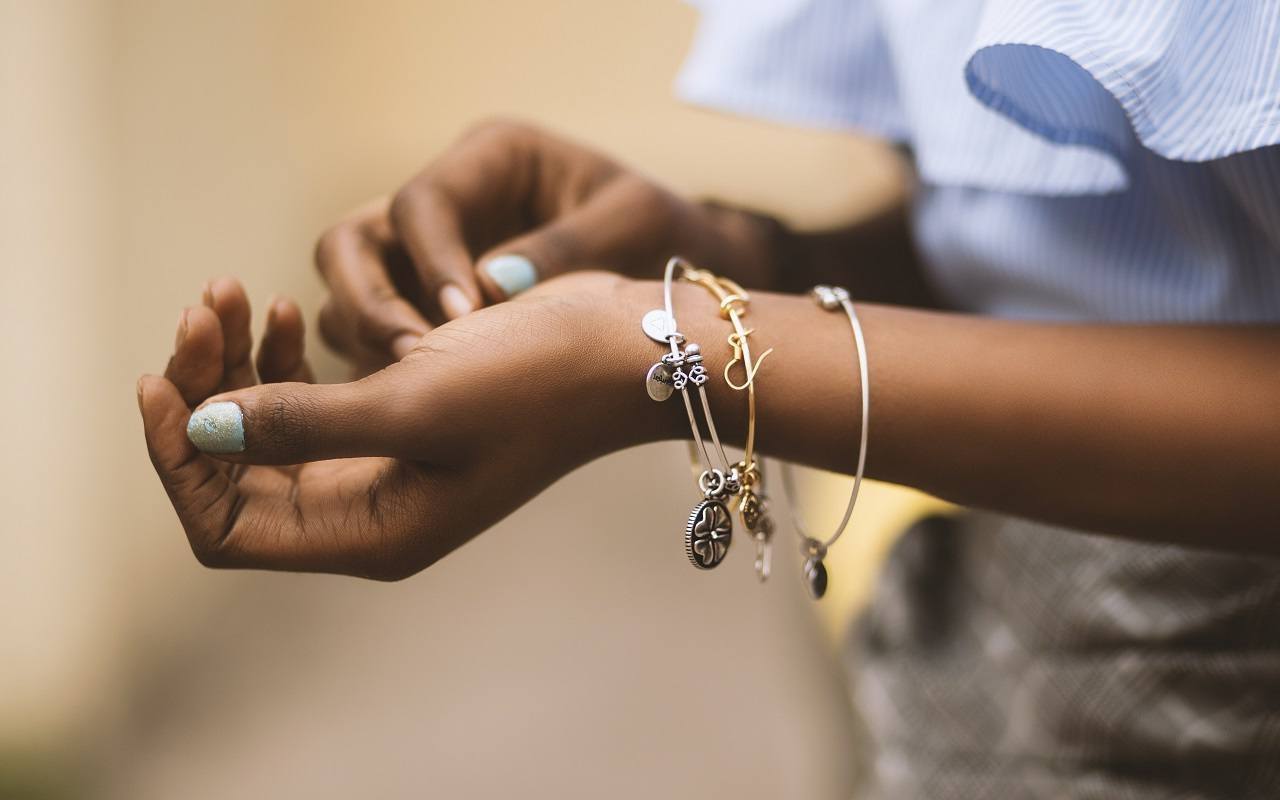 What is a Negative Ion Bracelet?

Bear with us for a moment, because we’re about to talk science. Understanding negative ions provides insight into the negative ion bracelet and how it works.

What are negative ions?

Remember back in school, when you learned that everything is made up of atoms? All atoms contain a nucleus, which contains positively charged protons and uncharged neutrons. The electrons that swirl around the outside of the nucleus contain a negative charge.

Atoms containing the same number of protons and electrons are neutral, meaning they have neither a positive nor negative charge. Neutral atoms that have either lost or gained an electron are called ions. Here’s where it gets just a little tricky. Positive ions are formed when neutral atoms lose electrons. Negative ions are formed when neutral atoms gain electrons. These can be inhaled or absorbed through the skin, creating a biochemical reaction that triggers the release of serotonin, improving mood and potentially bringing additional benefits.

How are negative ions formed?

Without getting too technical, negative ions are typically formed in nature when molecules break down due to external forces such as UV radiation, flowing water, or wind. When you stand on a sunny beach, breathe in the breeze that comes from the sea, and watch waves crash hypnotically against the sand, you are bathed in negative ions, breathing them in and absorbing them as they wash over your skin. Even though you can’t see them working, negative ions are part of the reason you feel so good in settings like this!

Think about the natural settings that tend to feel most rejuvenating. Besides beaches, you’re likely to feel refreshed when you’re near a waterfall or a flowing stream. Even a large fountain provides a stimulating, refreshing effect. There’s not a lot of scientific evidence to explain why inhaling these negative ions helps us feel like we’ve been recharged, but the effect is definitely real – so much so that negative ion therapy machines are being tested for treating people who suffer from seasonal affective disorder.

How do negative ion bracelets work?

Negative ion bracelets are designed to provide their wearers with steady exposure to negative ions, and provide the benefits that come with increased negative ion exposure. These bracelets are made with materials that produce negative ions on their own, or that generate negative ions when they are exposed to heat from your skin. Tourmaline, zeolite, and germanium are a few; sometimes these materials are powdered and mixed with silicone to form stretchy ionic bands that stand up well to increased physical activity. Negative ion jewelry strength is measured in the number of negative ions produced per cubic centimeter or per cubic inch. As you might have guessed, higher numbers are preferable.

Some negative ion bracelets include strong gauss magnets, which are said to provide some pain relieving benefits.

Some sports medicine professionals believe that this interaction really does shorten muscular recovery time and enhance performance. Of course, it’s up to each individual to determine whether negative ions benefit them or not.

Is there anything to those discussions about the negative ion bracelet hoax?

Absolutely! We have to remember that manufacturers often grasp onto the latest trends and attempt to leverage them in order to increase profits. While there’s nothing wrong with businesses making money, it’s a very good idea to choose carefully if you decide that an ion bracelet is for you. Here are a few ways to determine whether a negative ion band is worth trying.

Do claims about a certain company’s ion bracelets seem outrageous? Is the company promising to cure illnesses? If so, be sure to take those claims with a grain of salt. The Federal Trade Commission has brought certain companies under fire for making claims that their ion bracelets could definitively reduce pain, even though those statements can’t be scientifically proven.

There are plenty of anecdotes about negative ion bracelets helping with strength, coordination, general wellbeing, and more. We’re not discounting these experiences at all, but we do want you to be well-informed. Officials with the American Academy of Family Physicians and the American Council on Science and health do not believe that negative ion bracelets have a positive impact on health. At the same time, it’s worth noting that public health officials must base their opinions on proven research and that research simply doesn’t exist.

We can draw some parallels between the lack of research on many herbal remedies and essential oils, as well as alternative therapies that bring positive effects despite a dearth of scientific evidence. Even though certain remedies and therapies have a reputation for working wonders, many health professionals doubt their efficacy.

Form Your Own Opinion

Negative ion bracelets aren’t terribly expensive, and just like other natural remedies, they have the potential to help you feel a bit better even if improvements are the result of the placebo effect rather than negative ions working their way into your bloodstream. Form your own opinion when determining whether to try a negative ion band or not. The worst-case scenario is that you’ll have a new piece of jewelry that looks nice! Unlike remedies that come with potential side effects, an ionic bracelet or band won’t harm you.

It’s worth noting that some people who wear negative ion bracelets with built-in magnets find that the bracelets can interfere with wearable trackers such as Fitbit when worn on the same wrist.

People who have pacemakers, insulin pumps, defibrillators, and other implanted electro-medical devices are discouraged from wearing magnetic therapy jewelry, as are those who are pregnant. Be sure to keep this in mind as you decide whether to try a negative ion bracelet and when determining which is the best negative ion bracelet for your unique situation.

See What Wearers Have to Say

What do others have to say about the bracelet you’re considering? Even though the correlation between the negative ions band and measurable health benefits hasn’t been proven, many people have experienced positive effects. Some others have felt nothing at all. That’s why negative ion bracelet reviews are a good source of information; you can weigh the pros and cons and decide which one is likely to be best for your unique situation. We’ve saved you some time by coming up with a list of some of the best negative ion bracelets and including links so that you can see what other people experienced.

As you determine which negative ion band or bracelet to try, keep quality and price in mind. Additionally, it’s a good idea to consider whether the material being used has the ability to produce negative ions on a consistent basis. Appearance can be a big factor too – after all, you’re most likely to enjoy wearing something that suits your sense of aesthetics.

If you’re looking for a simple, sporty negative ion bracelet without a clasp, this one is worth a look. The Rally Band 30 Nano Series bracelet features nano ceramic ionized germanium particles and permanent laser point rare earth neodymium magnets (3500 gauss each). It comes in small, medium, and large sizes. This bracelet gets good marks for its stretchy, resilient design and its casual, sporty appearance. It’s a favorite with athletes and musicians, as well as with people who have painful arthritis that makes clasps difficult to deal with.

This classic link bracelet offers alternating black and silver colors on its exterior. Inside, a double row of 3000 gauss magnets alternates with 4-element negative ion inserts. The bracelet contains germanium powder as well. The titanium is hypoallergenic, and designed to complement an active lifestyle. The Men’s Titanium Magnetic Therapy Bracelet gets positive feedback for the most part. While the black color can sometimes show scratches but overall, people like the way this bracelet looks and feels. Some wearers mention that the pain reliving effect happens gradually, while others say that they tend to feel more energetic overall.

If you’re looking for a beautiful, functional negative ion bracelet for women, this one might make it to the top of your list. Made from hypoallergenic stainless steel and embellished with clear crystals that provide the look of a classic tennis bracelet, the MagEnergy Arthritis Bracelet contains germanium and other beneficial minerals. This bracelet gets rave reviews for its ability to ease pain and swelling associated with arthritis, and people love the way it looks. The company also offers a similar bracelet with rose gold plating.

Those who want a simple, stretchy silicone negative ion bracelet might like this one. The Youthwaters Strength Stability Bracelet comes in different sizes and colors. It contains powdered minerals that release negative ions during wear, however there are no magnets in the design. This bracelet doesn’t work for everyone, but many users mention that they feel stronger, more focused, and more energetic when they wear the bracelet on a regular basis. Like other stretchy negative ion bracelets, this one tends to wear out after several months. If you’re looking for a design that doesn’t require replacement on a fairly regular basis, you’ll want to consider a metal or tourmaline negative ion bracelet instead.

This simple, handcrafted black tourmaline bracelet features a single row of polished natural tourmaline beads and mounted on a stretchy band. The unisex design isn’t great for small wrists, but it delivers an average charge of 2,000 ions per centimeter. This natural tourmaline negative ion bracelet gets high marks for its attractive appearance and its pleasant feel. Wearers mention sleeping better, feeling more energetic, and even losing weight.

The Takeaway: Should You Try a Negative Ion Bracelet?

Negative ion bracelets benefit many people, but there are plenty of others who have tried them and found that they didn’t notice much of a difference. Keep in mind that everyone has a unique situation with different stressors, different exposure to electromagnetic radiation, and a variety of different factors that play into overall health and well-being. We think it’s best to keep an open mind and if the concept of wearing a bracelet with potential healing effects appeals to you, go ahead and give it a try! Choose a design that appeals to you and see if you feel a bit better after wearing it for a few weeks.