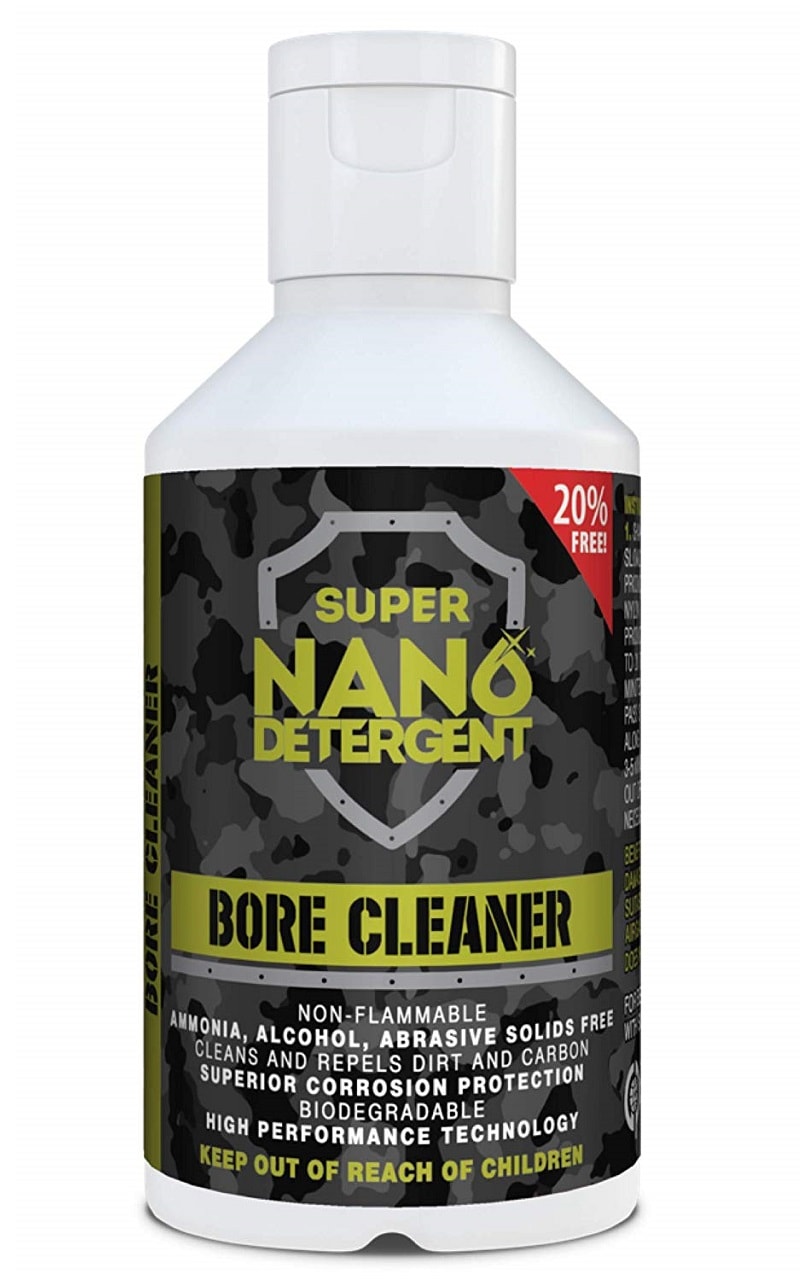 Whether you’re a hunter, a police officer, a soldier, or someone who simply enjoys the fun of skeet shooting, you know that a clean gun is a happy gun. The question is, with so many products on the market, what’s the best gun cleaner? We decided to tackle this issue, reading hundreds of reviews to bring you one reliable report that makes it easier than ever to choose the best gun cleaning solvent for your needs. Here are five excellent products to consider next time you’re shopping for gun cleaning supplies.

Some of us really like the old-fashioned cleaning process: Gather equipment, sit down, disassemble your firearm, and clean it up with traditional gun cleaner. Then there are the rest: We’re kind of in a hurry, we don’t want to spend our spare time on weapons maintenance, and we want a reliable product that won’t leave us worrying about whether we’ll encounter problems later on. That’s where One Shot Gun Cleaner and Lube comes in.

This product is designed to prevent buildup, and it penetrates deep to break down carbon residue that some other cleaners leave behind. After the product evaporates, it leaves a dry, powdery lubricant behind. This is great for weapons that receive frequent use and maintenance, but not the best for those that are expected to stay in storage for long periods of time. Users like the fact that this gun cleaner doesn’t have a strong odor – in fact, one couldn’t even detect a smell.

Citing expense, quite a few users start with a cheaper spray cleaner to remove heavy residue. Next, they follow up with One Shot – one application to finish cleaning, and a second to protect everything. As part of an overall gun cleaning plan, this product is pretty hard to beat.

Most reviewers are thrilled with this gun cleaner / lubricant combo, using it on everything from shotguns to semi-auto handguns. One mentions that it’s best to use another lubricant on high-friction areas like slide rails.

If you can’t stand carbon or grease, then Eagle Tears might be the best solvent for your needs. Developed by a US Marine, this product cuts through all the gunk and leaves your weapon ready for lubrication. You can purchase Eagle Tears gun cleaning solvent alone or as part of a gun care bundle that also includes lubricant and some of the best gun oil on the market. Everything is biodegradable and safe for your skin, so you don’t have to worry about whether you’re subjecting yourself to anything nasty while maintaining your weapons.

There are not many reviews on Eagle Tears yet but those who have reviewed the products have left 100 percent positive remarks, mentioning that it works well for cleaning and maintaining hunting rifles. They mentioned cleaning their guns in the fall and returning to find them looking freshly maintained after a year in storage. They were also pleased with the natural citrus scent.

Made without alcohol, ammonia, or harmful toxins, Super Nano Detergent Bore Cleaner is odorless, non-abrasive, and safe for use even at home. Frequently rated as one of the best bore cleaner products on the market, this biodegradable solvent will not harm your weapon. It is safe for metal, plastic, and bluing, yet it does an outstanding job of removing rust, dirt, powder, and traces of copper and lead that can build up and lead to serious problems.

Besides offering protection against corrosion, this product leaves a protective film behind. This fills micro-cracks inside the bore, preventing carbon buildup and keeping minute particles of debris out.

Users like the fact that this product cleans their weapons with little to no scrubbing required, and with no nasty odors like some gun cleaners have. You can clean the bore alone, or clean an entire gun with it, even after putting hundreds of rounds through, and even if you have an issue with feed fouling.

This is one of the best gun cleaners on the market but there’s one caveat: it doesn’t provide any lubrication for areas that need it. You’ll need to handle that in a separate step. Most people who choose this product are perfectly fine with that but those who are in a hurry tend to prefer all-in-one products. Overall though, this is one of the best products to have on hand if you tend to shoot frequently and you want to keep your bore clean.

Those who prefer gun cleaner spray products that take care of cleaning, lubricating, and protecting in one step might like Eezox Premium Synthetic Gun Care. In case you’re out in the field, this all-in one product might be extra appealing not just for its convenience, but for its ability to function at temperatures between -95 degrees F and 450 degrees F. It’s among firearms manufacturers’ top choices, and it even protects your valuable weapons when they’re being stored under conditions where temperature and humidity aren’t being controlled.

There are a couple of downsides to this otherwise excellent cleaner. First, it’s carcinogenic so be sure to wear gloves when you use it. The second problem is that there are very strong fumes – a couple of people liked the scent but more than a few said that the odor lingers so it’s important to work in a well-ventilated area. Additionally, this solvent does not do a great job on fouling. If you have an issue with fouling, use another product first, and then use Eezox. WipeOut foaming bore cleaner is a good copper solvent to use if you need to address an issue like this.

Eezox gets mostly 5-star reviews from customers, particularly those who live in areas where humidity is an issue. One mentioned leaving his handguns in a lock box in his car, carrying concealed and sweating profusely, and still having minimal issues with rust developing despite the dampness and salt. Another mentioned that the Royal Canadian Mounted Police and Seecamp use Eezox for all of their shotguns, rifles, and service weapons. The same person recommends it for reloading equipment as well as other precision tools that need to be well-lubricated.

For pistols and rifles, Wipe Out Bore Cleaner is a rapid alternative to scrubbing with a brush, and it’s also an excellent followup to traditional bore cleaning with a brush, simply to ensure that you’ve gotten everything out. Whether you’re dealing with copper fouling in the bore or simple grime, you’re going to appreciate what this product can do.

A little bit goes a long way, but don’t expect it to work instantly. Unlike harsh solvents that need to be wiped up immediately, Wipe Out can be allowed to sit for a few hours or even overnight. There is no need to spend lots of time and effort scrubbing, and there are no worries about corroding your expensive firearm’s steel with harsh chemicals.

It’s worth noting that one user got a defective can that didn’t dispense the foam properly and some other users have had issues with the foam hydrolocking and not reaching all the way through the bore. The good news is that the hydrolocking issue is easily solved by working from the muzzle end. Also, it’s a good idea to have a towel on hand at the other end of the bore near the action since the foam really expands quickly and has created more than one mess. It’s not a big deal since gun cleaner is typically a messy product, just something to be aware of.

Be aware that the “one shot” application isn’t going to work on every firearm. More than a few users have mentioned that if it’s your first time using Wipe Out to deal with copper fouling, you’ll probably have to use multiple applications to get all the blue out. The good news is that when you’re finished, you should have a bore that looks and performs like brand new. The bad news is that the reapplication process can take a long time since it’s best to let the product sit for several hours or overnight while it clears fouling.

With the help of a good gun cleaning kit, some of your favorite music to keep you company while you work, and just a little bit of good old fashioned elbow grease, the right cleaner can transform your weapon from grungy to inspection-ready – almost in a flash.